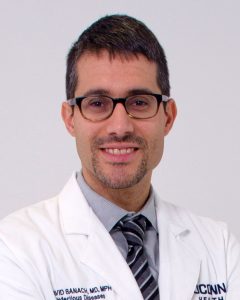 If anything, I would say this situation actually reinforces the importance of vaccination. — Dr. David Banach
President Biden is back in isolation, testing positive again for COVID-19 despite testing negative a week after his initial positive test July 21.
It may be a puzzling sequence, but there is an explanation.
Dr. David Banach is UConn Health’s hospital epidemiologist. (Photo by Janine Gelineau)
“It’s unlikely this is anything other than the original infection resurfacing,” says Dr. David Banach, infectious diseases physician and hospital epidemiologist at UConn Health.
Biden’s physician says the president had been taking the antiviral drug Paxlovid, which is a standard treatment for those with COVID-19 who are considered “high-risk,” including older patients. Biden is 79.
“It’s not unheard of for people to take Paxlovid, clinically improve, be antigen-negative, then ‘rebound’ a few days later as antigen-positive,” Banach says.
Antigens are substances that cause an immune response. Antigen tests are commonly used in at-home testing and can yield results in 15 minutes by detecting antigens specific to COVID-19. Antigen tests differ from PCR (polymerase chain reaction) tests, which look for genetic material that indicates a COVID-19 infection.
Due to the nature of his position, the president tests routinely. PCR testing generally is not recommended within 90 days of infection because it frequently remains positive for a prolonged period of time, even after patients recover and are no longer contagious, so Biden was given antigen testing instead. All signs point to the Paxlovid suppressing the antigens to undetectable levels, resulting in temporary negative results, followed by the “rebound.”
As of Tuesday Biden’s only symptoms were a “loose cough,” according to a memo from his physician, Dr. Kevin O’Connor, who reported, “He remains fever-free and in good spirits.”
The White House says the president is fully vaccinated and up-to-date on all his recommended boosters. He will continue to isolate, likely until he can produce at least one negative antigen test.
“While this is another example of someone getting infected despite being is fully vaccinated and boosted, it’s important to understand the vaccines protected the president from serious illness from infection,” Banach says. “If anything, I would say this situation actually reinforces …