As more men leave the workforce, women are stepping in to fill those jobs – CNN 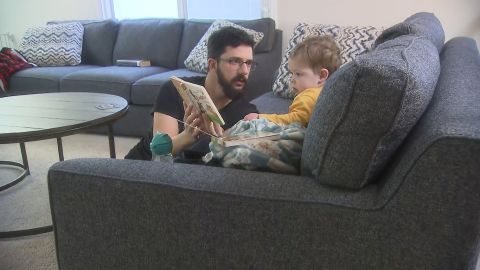 A typical morning at the Schnitzler household starts with David and Allison feeding their 17-month-old Winston. Allison, 33, and David, 32, play with Winston as they both get ready to go to work.

Allison heads out the door — to her family medical practice — and David, an insurance underwriter, starts his day… as an at-home dad.

“Caring for Winston, tending to the house, playing with him, all of that comes first,” he told CNN.

Last year, the Schnitzlers made the decision that David would quit his high-paying job to stay home and care for Winston as Allison went on to pursue her career. Covid fears for a then-unvaccinated Winston at daycare and two parents working long hours helped lead them to their choice. Both say they feel fortunate they can live on Allison’s salary.

“I was at a kind of pivotal point in my career, which made the decision all that much more difficult at the time. Am I throwing that all away to take care of a baby? Am I even going to like taking care of a baby?” David said.

Turns out he does — and said the roles they now have work. And that is reflective of new trends developing both for men and women in the labor force.

In recent months, more men aged 30-44 have been dropping out of the workforce, according to data from the Bureau of Labor Statistics. The labor force participation rate for men in that age group is now lower than it was pre-pandemic. For example, in David’s age range of 30-34, Labor Department data shows that 90.2% of men were either employed or looking for a job in February 2020, right before the pandemic. Last month, that number was 89.8%.

Although more men are stepping out of the workforce to take care of children post-pandemic, it’s still only in the single digits, according to economist Richard V. Reeves.

“We have seen an increase in the number of men taking on those roles, but it’s nothing like enough to explain this retreat,” said Richard V. Reeves, a senior fellow at the Brookings Institution. “And so, it’s a bit of a mystery to economists as to exactly what’s happening with these men. Some of the leading theories are that they’re retreating because of problems with disability in many cases, mental health problems.”

David Schnitzler says people in his community still have a hard time understanding that he is the primary caretaker for their son.

“It doesn’t matter if it’s male, female, whatever, everyone’s got their place. [Allison] has a high level of skills and passion for her job, and that’s wonderful. I’m able to, in my way, support her being, I’d like to say, a better physician,” said Schnitzler.

At the height of the pandemic, 22 million jobs were lost. The data showed that the total number was skewed more towards women than men, since so many women assumed caretaker roles at home when daycare centers and schools closed during lockdowns. Since then, men and women have gained back all the jobs lost.

And of the 263,000 jobs added to the US economy last month, 61.6% of those are held by women, according to the National Women’s Law Center. More women between the ages of 30-44 are joining the workforce in recent months — and at a higher percentage than before the pandemic.

“The fears of a ‘she-cession’ turned out largely to be unfounded,” said Reeves of the idea that mostly women would be negatively impacted by pandemic-related job losses. “The women are returning to the labor market, and we’ve actually seen quite a big increase in the share of women in management roles and senior management roles.”

Women are also stepping in to roles in more male-dominated industries, like construction. Ava Sedaghat joined the construction industry about two years ago as a project engineer in New York City.

“I think it was definitely intimidating because my only knowledge of the construction industry was that it was pretty heavy and male dominated. But the more that I started working in the industry and the more people I came into contact with, I think I realized pretty quickly on that there’s a place for everyone in construction,” said Sedaghat.

While women make up just 14.1% of the construction industry, that’s the highest on record, according to Labor Department data.