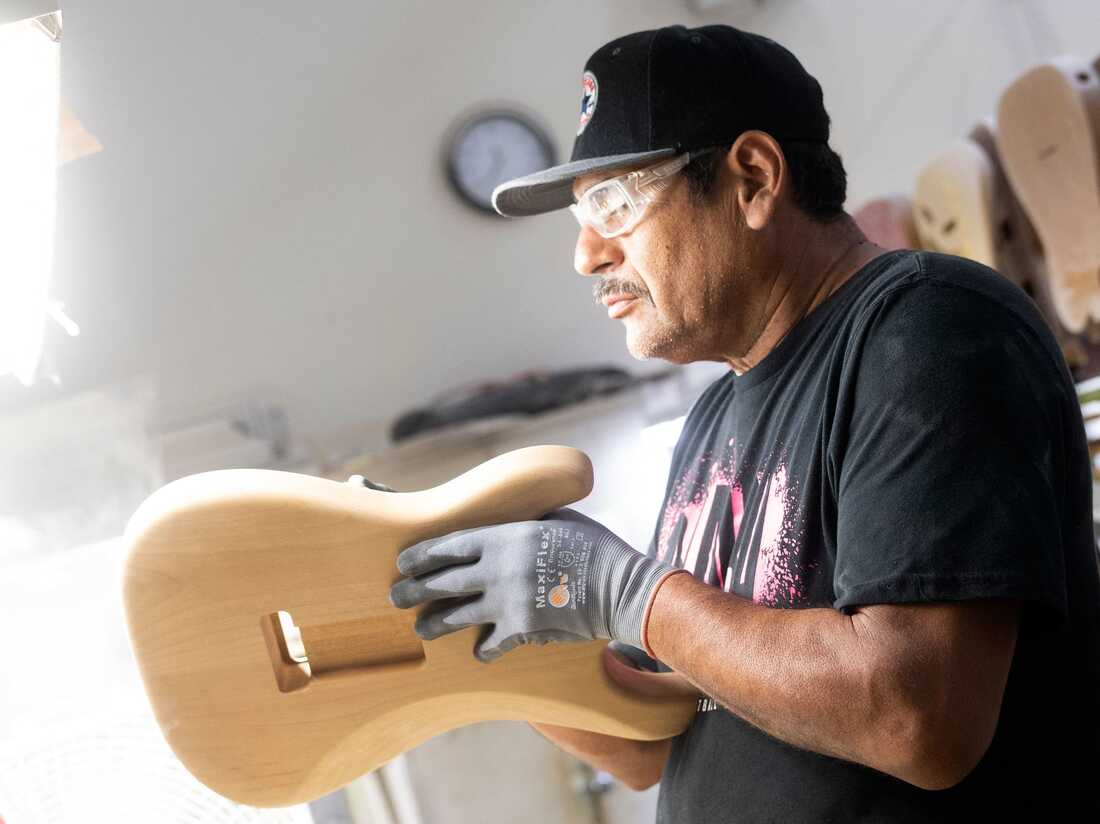 A builder sands the body of a guitar at the Fender factory, in Corona, California, on October 6, 2022. Industries sensitive to rising interest rates have been slowing hiring.

Hiring slowed only slightly in November, as rising interest rates weighed on businesses, but the U.S. job market remains unusually tight. The Labor Department’ monthly job report released Friday shows employers added 263,000 jobs in November — down only modestly from a revised 284,000 jobs added the month before. The unemployment rate held steady, at a low 3.7%.
Loading…

All three major indices sank when the stock market opened on Friday, with investors fearing that the Federal Reserve will respond to the strong jobs report with even more aggressive interest rate hikes.
Loading…

Competition for workers pushes up wages, which could stoke inflation “The labor market remains far too hot for the Fed’s liking,” Wells Fargo economists Sarah House and Michael Pugliese wrote in a research note. Competition for workers has been pushing wages up at a rapid rate, and the Federal Reserve is worried that could add to already high inflation, especially in the services sector where wages are one of employers’ biggest costs. Average wages in November were 5.1% higher than a year ago — a larger annual increase than the month before. “The Fed has essentially said that they need to see a cooler job market to help reduce those inflationary pressures,” House said.

The central bank has been raising interest rates aggressively in an effort to tamp down demand and bring prices under control. Since March, the Fed’s benchmark borrowing rate has jumped from near zero to almost 4%. It’s likely to go even higher later this month. Rising interest rates have cooled demand for workers, but Fed chairman Jerome Powell said this week there’s still a long way to go. “Demand for workers far exceeds the supply of available workers,” Powell said Wednesday. “Thus, another condition that we’re looking for is the restoration of balance between supply and demand in the labor market.”

While the number of job openings has declined slightly, Powell noted there are still about 1.7 unfilled jobs for every unemployed worker.

Ordinarily, the Fed’s rate hikes would be felt most acutely in interest-sensitive industries such as construction and manufacturing. But construction companies added 20,000 jobs in November while factories added 14,000. There are some signs of a slowdown. Home sales and construction have dropped significantly. And manufacturing activity declined in November for the first time since the beginning of the pandemic, according to a survey of factory managers released on Thursday. “We went, what, 29 months in expansion mode, but we came down pretty quickly, primarily driven, I think, by the interest rate environment,” said Tim Fiore, who oversees the survey for the Institute for Supply Management. As new orders for manufactured goods declined in recent months, some factory managers stopped filling vacant jobs and others resorted to layoffs. But overall employment in the sector has been resilient. “I think this is still a soft contraction,” Fiore said. “I’m really hopeful that some amount of demand will come back. There’s still pretty robust production plans for 2023.” Friday’s report did show some job cuts. Retailers shed 30,000 jobs and warehouses and transportation companies cut 15,000. High-profile tech companies like Twitter have also announced job cuts, but so far there’s been little sign of widespread layoffs. New claims for unemployment benefits remain at historically low levels.
“Despite a smattering of news headlines on corporate announcements of layoffs, the four-week moving average of initial jobless claims is still lower now than it was over the summer,” said Nela Richardson, chief economist at the payroll processing company ADP. The number of people available to work has stayed low, and that’s a problem One reason the labor market is so tight is that while jobs rebounded quickly from the pandemic recession, the workforce has not. The labor force actually shrank in November by 186,000 people.
Loading…

Early retirements, limited immigration, and COVID-related deaths may have kept the number of available workers in check, Powell said. And there’s little evidence that’s going to change any time soon. “I think what the Fed has learned is that they can’t count on a rebound in labor supply,” House said. Instead, the central bank will continue to push interest rates higher, in an effort to curb inflation and bring prices under control. Powell acknowledged that may result in somewhat hi …