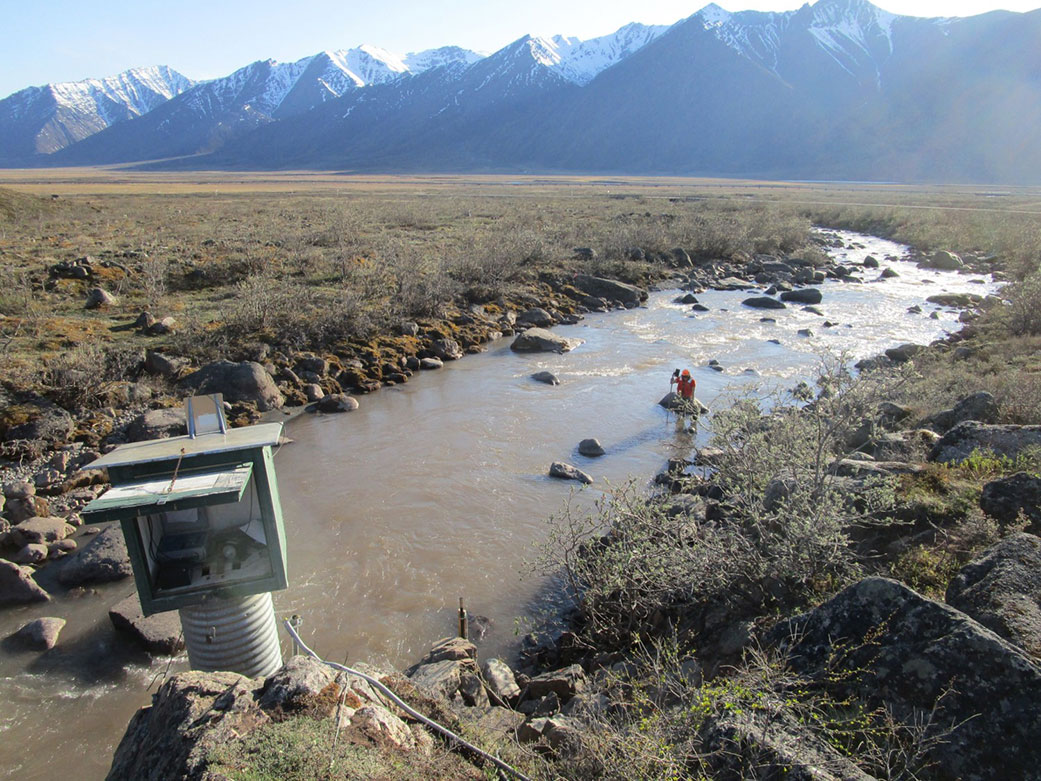 The upcoming Surface Water and Ocean Topography mission will provide a trove of data on Earth’s water resources, even in remote locations. Alaska serves as a case study.

While Alaska straddles the Arctic Circle and is covered by vast expanses of frozen land, the state also has a lot of liquid water. In fact, Alaska holds about 40% of U.S. surface water resources. This includes more than 12,000 rivers, thousands more streams and creeks, and hundreds of thousands of lakes.

So when the Surface Water and Ocean Topography (SWOT) satellite launches this month from California’s Vandenberg Space Force Base, it’s only natural that Alaska will be among the first beneficiaries of this mission led by NASA and the French space agency Centre National d’Études Spatiales (CNES), with contributions from the Canadian Space Agency and the UK Space Agency.

On a tributary of the Atigun River, this is one of just 113 USGS stream gauges in Alaska. The state’s size, terrain, and limited transportation infrastructure make traditional stream gauging cost prohibitive. SWOT will fill gaps in remote places like Alaska where surface water data is sparse or nonexistent. Credit: Jason Baker, USGS

SWOT will measure the height of nearly all water on Earth’s surface, from large rivers to lakes and reservoirs to the ocean. It will fill in gaps in remote places like Alaska and in many countries where surface water data are sparse or nonexistent. These measurements will be valuable to water management and disaster preparedness agencies, universities, civil engineers, and others who need to track water in their local areas.

Alaska’s sheer size, rugged terrain, and limited transportation infrastructure make traditional stream gauging cost prohibitive. While streamflows in most of the United States are continuously monitored by a U.S. Geological Survey (USGS) network of more than 8,500 stations, there are currently only 113 gauges in Alaska, and many big rivers aren’t monitored. The amount of water flowing through such rivers affects everything from the health and biodiversity of fish species to transportation and drinking water availability.

The Surface Water and Ocean Topography (SWOT) mission will help communities prepare for the consequences of a changing climate by collecting data that monitors the planet’s lakes, rivers, reservoirs, and the ocean. Credit: NASA/JPL-Caltech/CNES/Thales Alenia Space

This dearth of Alaskan river information made USGS a logical choice to serve as a SWOT early adopter. SWOT data will complement a system currently in development to monitor those rivers, using radar altimetry data from the U.S.-European Jason-2 and -3 and European Space Agency Sentinel satellites (developed in the context of the Europe …