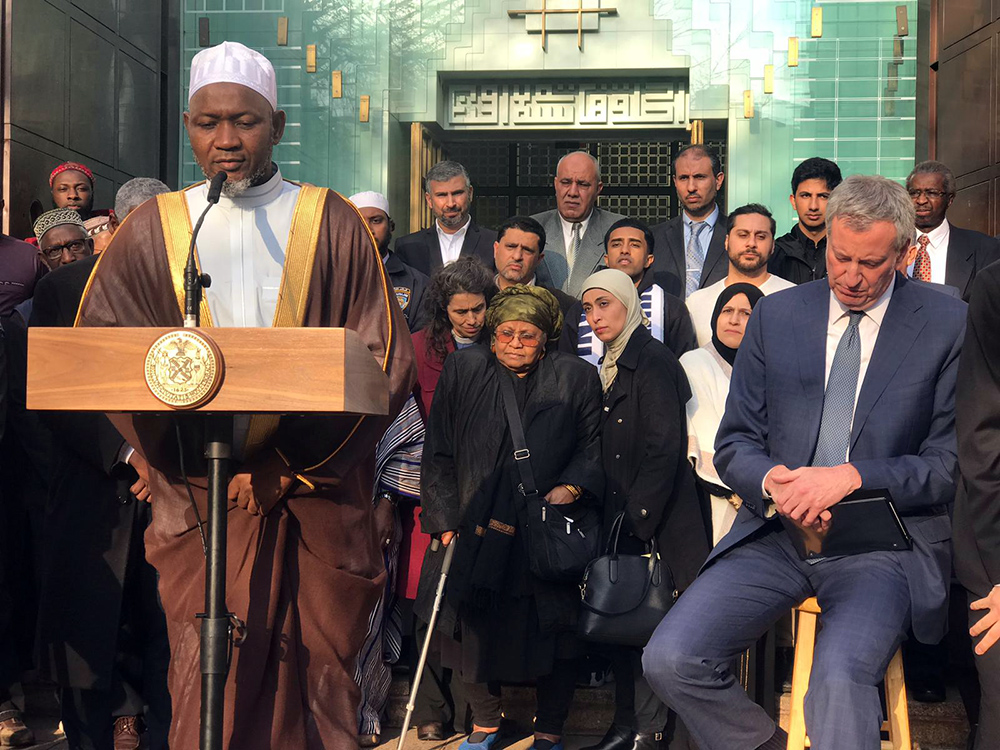 NEW YORK (RNS) — At the Islamic Cultural Center of New York on Manhattan’s Upper East Side, Sheikh Saad Jalloh, the center’s imam, reminds his congregation to be aware of the fact that at a busy mosque with more than 1,500 members in the middle of a major metropolitan area, anything can happen.And anything often does: Jalloh said the center frequently receives bomb threats by phone and email. People have walked their dogs in the prayer room of the mosque and dumped garbage in the sheikh’s prayer station.
Security at the mosque involves both communication with the police — “We have a very good relationship with the 23rd Precinct,” said Jalloh — and vigilance from those who attend.
“I always give a brief talk right after the prayer to the congregants,” Jalloh told Religion News Service, encouraging them “to be very nice with the neighborhood, to treat them well, to make sure that there’s a good relationship between us and them, and not allow hatred, because this may lead to hate crimes or may lead to (an) attack.”
Imam Saad Jalloh, left, speaks during an event with New York City Major Bill de Blasio, right, at the Islamic Cultural Center of New York in Manhattan in 2019. Photo courtesy of ICCNY

New Yorkers of all faiths have faced increasingly daunting numbers of religiously motivated hate crime and bias incidents among the more than 450 confirmed bias and hate incidents reported in their city last year. These attacks range from the personal — two Sikh men were robbed and assaulted in Apr …