Opinion: In China’s countryside, a Covid-19 tsunami is brewing – CNN 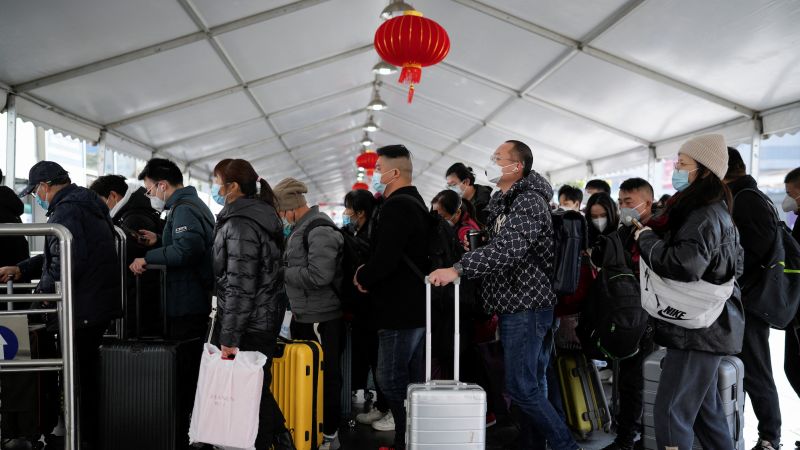 Editor’s Note: Yanzhong Huang is a senior fellow for global health at the Council on Foreign Relations and a professor at Seton Hall University School of Diplomacy and International Relations, specializing in Asia. He is the author of “Toxic Politics: China’s Environmental Health Crisis and Its Challenge to the Chinese State.” The views expressed here are his own. Read more opinion on CNN.

When I was a little boy in rural China, one of my happiest moments was seeing my dad getting off the ship from Shanghai, carrying the load of goods he had purchased for the Lunar New Year – also known as the Spring Festival.

At that time, my dad worked for a tailor factory in suburban Shanghai, and only returned home when the Lunar New Year was around the corner.

This, after all, is the most important festival in China, with roughly 4,000 years of history.

For hundreds of millions of migrant workers across China, the 2023 Lunar New Year – happening on January 22 – will be a particularly special celebration.

Many have been separated from their children and parents in the countryside for three years, due to the government’s strict Covid-19 controls.

Now that the country has abandoned its zero-Covid policy and lifted domestic travel restrictions, the government estimates the number of passenger trips during the Lunar New Year rush (from January 7 to February 15) will be double that of same period last year – reaching close to 2.1 billion.

And the world’s largest annual human migration is expected to fuel the spread of Covid-19.

As early as mid-December, many rural areas were already seeing a deluge of cases. In a village of central Henan province, one health worker saw more fever patients during the period of December 17 to 24, than in the entire previous year.

A study conducted by Chinese scientists forecasts that rural areas will be hit by the viral wave in mid-to-late January 2023. But the study apparently underestimates the speed and scale of the spread. Henan, a major supplier of migrant labor, reported that as of January 7, almost 90% of the population, or 88 million people, had been infected.

Is China’s rural healthcare system able to withstand skyrocketing Covid-19 cases? Until recently, the government answer was clear: no.

In fact, it justified its zero-Covid policy by pointing to China’s large elderly population and limited healthcare resources. Both problems are pronounced in the vast countryside.

Is China’s rural healthcare system able to withstand skyrocketing Covid-19 cases? Until recently, the government answer was clear: no.

The population there is ageing faster than in urban areas. More than 120 million people aged 60 and over live in the countryside – accounting for 23.8% of the rural population, compared with 15.8% in urban areas, according to the 2020 census.

When it comes to Covid-19, age matters. Population aging is highly correlated with the incidence of noncommunicable diseases – including diabetes, cancer and cardiovascular diseases. As much as 83.4% of the rural elderly had underlying conditions, according to a 2015 study, making them highly vulnerable to Covid-19.

A window into countryside care

Most of the grassroots health workers in rural areas receive little medical training: no more than 1% of them hold college degrees. Worse, the reform has not altered healthcare providers’ profit-seeking behavior. Wasteful overservicing, including excessive use of high-tech checkups and performance of unwarranted operations remain common in the countryside.

Concerns about the quality and cost of healthcare may explain why rural patients often bypass the community health clinics, to seek care directly at county hospitals or urban health centers.

How zero-Covid widened the healthcare gap

To add insult to injury, the implementation of zero-Covid over the past three years widened the rural health system capacity gap. The government restrictions on purchasing fever and cough medicines resulted in the shortage of their supply. (One likely reason is that because of the government ban, manufacturers curtailed their manufacturing capacity.)