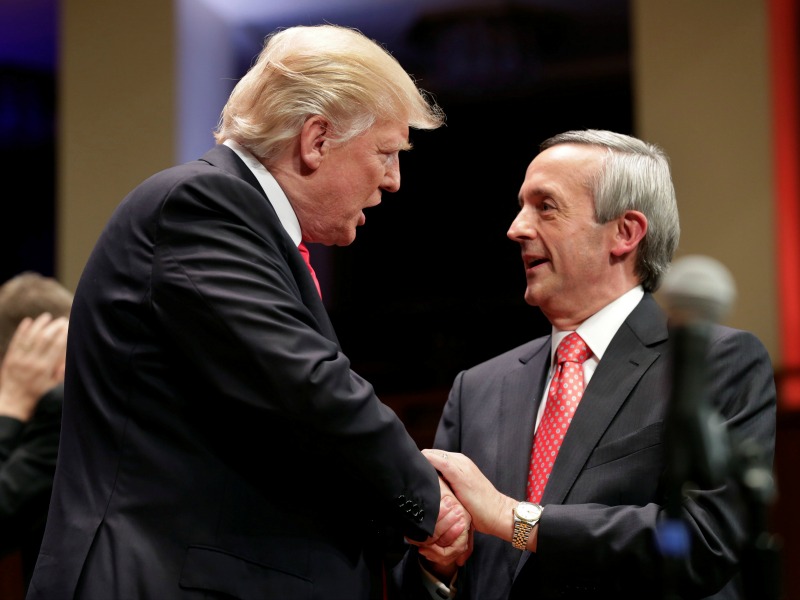 (RNS) — Former President Donald Trump is chiding evangelical Christian pastors who previously supported him but haven’t endorsed his new presidential campaign, accusing the faith leaders of “disloyalty.”During an appearance on the Real America’s Voice show “The Water Cooler” on Monday (Jan. 16), host David Brody asked Trump about evangelical leaders such as Robert Jeffress, a Texas pastor who was one of the former president’s most stalwart supporters during his presidency but who recently announced he would not endorse Trump unless he wins the GOP primary race.
Despite initially saying he didn’t “really care” about the lack of endorsement from pastors such as Jeffress, who preached a sermon to Trump the day he was inaugurated titled “When God Chooses a Leader,” the former president went on to voice palpable frustration.
“It’s a sign of disloyalty,” Trump said. “There’s great disloyalty in the world of politics and that’s a sign of disloyalty.”
Trump then touted his record on abortion, noting his administration appointed three conservative Supreme Court justices — a move that ultimately resulted in the overturning of Roe v. Wade, ending nearly 50 years of the nationwide right to an abortion.
Nobody “has ever done more for right to life than Donald Trump,” insisted the former president.
Trump appeared to blame evangelical leaders for the Republican Party’s meager showing in the 2022 midterm elections, saying he was “a little dis …